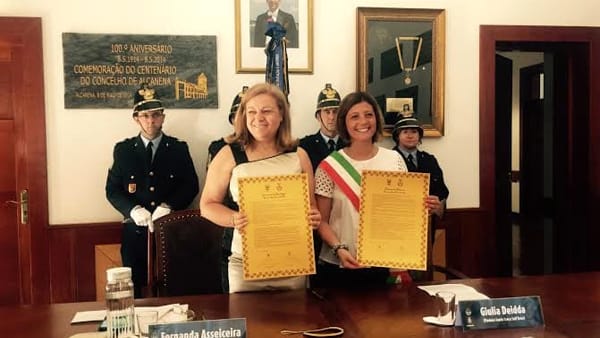 After almost two years since the first meeting between the two municipalities of Santa Croce sull´Arno and Alcanena (Portugal), strongly supported and promoted by Mr. Roberto Lupo of DELTACQUE Srl, it has concluded the administrative path to the signing of the twinning between the two cities. The signing ceremony took place on July 16 in Alcanena in conjunction with another great event for the Portuguese leather district: Expopelle. Guest and representative for DELTACQUE Srl in both the events was our technician Mr. Andrea Ciulli.
DELTACQUE Srl, prouds for the successful conclusion of an agreement promoted personally, wishes to thank all the people who made possible the twinning and in particular Mr. Hugo Santarem (adviser to the municipality of Alcanena) for all the support and assistance extended.
< < PREVIOUS PAGE
NEXT PAGE >>
Realizzazione siti web www.sitoper.it
close
Choose the language
It appears that your browser language is different from the website.